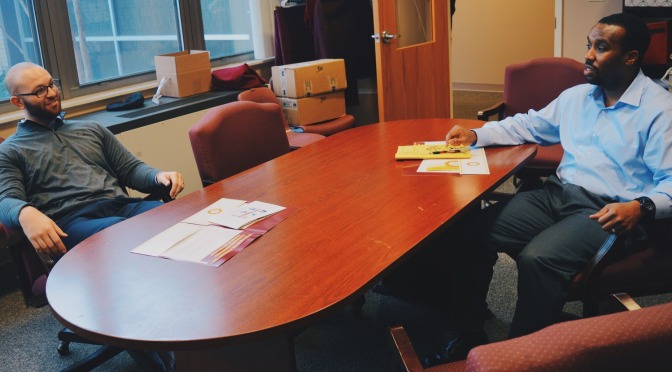 Alumni return to play vital roles in the McNamara community.

A former police officer and a future pro-wrestler are both working alumni here at McNamara and are proving the unofficial theory that Mac indeed comes back! After four long strenuous academic years every student to graduate from McNamara was ready to dart across the stage at the Shrine. As students of McNamara this duo were both filled with anticipation to graduate from their now alma mater and workplace.

Mr. Gloster ’96 and Mr. Southworth ’05 are both important members of the admissions office and they also have the pleasure to teach in the History and English department.

Gloster and Southworth returned to McNamara in a similar manner. When asked how, they said, “Dr. Clark called…” So if you ever want to return to McNamara as a teacher keep your phone close and Dr. Clark or Dr. Van der Waag’s numbers in your favorites! The two also acknowledged that a lot… has changed in the school since they were students. Gloster said that there are much more students and the Holy Cross identity is more prevalent in the community. Southworth adds that the campus is definitely upgrading and the applicants are increasingly diverse with enrollments from a variety of schools.

They also had the time to recollect on some of their favorite memories, the two were both stumped and reminiscent of their old memories that they had to recall. Gloster remembers, “Mr. Turner would throw our books out of the window whenever we were off task and we would have to go get them from outside.” He also talked about how his now department colleague, Mr. Williams was always a great teacher and role model.

Southworth spoke of a memory of his physics class with Mr. Green. He remembers in physics there were strong industrial magnets for experiments and how a friend of his, David Rohan had a fun experience with the magnets. Southworth said, “David was playing around with the magnets and he gets the magnets stuck in his mouth and we had to get Mr. Green to get it out.

The fun times at Mac seem to be lifelong stories that will never be forgotten because of the connection that they have to the school. Though they are currently employed here there still exist the possibility that they could have landed different careers. When asked if they were not working here where they would be the pair had surprising answers. Gloster said he would most likely still be a police officer. Southworth said that there is a possibility that he would pursue a WWE pro-wrestling career in the future. Southworth explains his love for the sport and we come to the conclusion that his finishing move would be “Saturday Detention.” Whether they would be fighting crime or other wrestlers with insubordinate behavior, for right now they are here at their alma mater being active in the community and truly giving back to Mac.