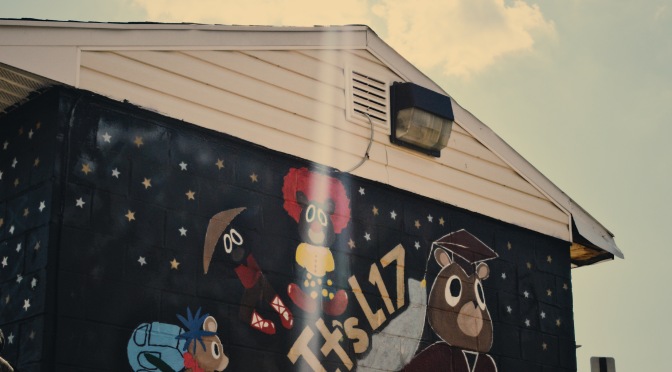 The senior class take a creative route on their shed design.

The senior class of 2017 has chosen to start early on their rocket powered journey to their dreams. Rockets are not made with brakes or mirrors, they are made to blast off and never worry about the past behind them. They are powered to reach their destination, and make an impact on where they are going.

They are doing so with the senior shed (*located right near the football field on campus) and homecoming theme of the Kanye West Graduation album. Seniors have taken inspiration from the colorful album art depiction of the cartoon [Kanye] bear being shot out of a rocket into a colorful sunset.

Illustrated on the shed are four bears. The first bear is dressed in Hawaiian garments to represent their freshman theme of Lilo and Stitch. Second is a bear dressed in Chinese garments for their sophomore year theme of Chinatown. Third is the bear as a clown to represent their junior year haunted circus theme, and fourth is the graduation bear draped in robe and cap and gown with a rocket attached to his back while shooting for the stars.

On the side of the shed in white bold font says “2k17 Made It Look Yeezy,” a play on words on how the senior class will make this their own. The shed is a creative depiction of the culmination of all four years and the fast approaching future.

Some seniors shared their positive sentiments of the shed, homecoming and the upcoming year. Senior Davona Johnson said, “I love the shed, it’s different and creative. 2017 is striving and thriving to be on the top.”

It truly feels as though this theme is really one that is aimed at the idea of being on top and ascending over trials, tribulations, and doubts. Taylor Marshall said “I like the transition of the four bears that represent our past and current themes and what better theme to pick for this year than Graduation.” Ashton Reid simply adds, “It’s L’17 (lit).”

The senior class seems adamant and ready to be on top and to be the embodiment of a rocket that can push pass anything to get to where it wants to be. Dreams are as big as you make them and 2017 is trying to make their dreams colossal and achieve them in an even larger way.

My Tweets
The Stampede is the official student newspaper of Bishop McNamara High School in Forestville, Maryland.
<span>%d</span> bloggers like this: