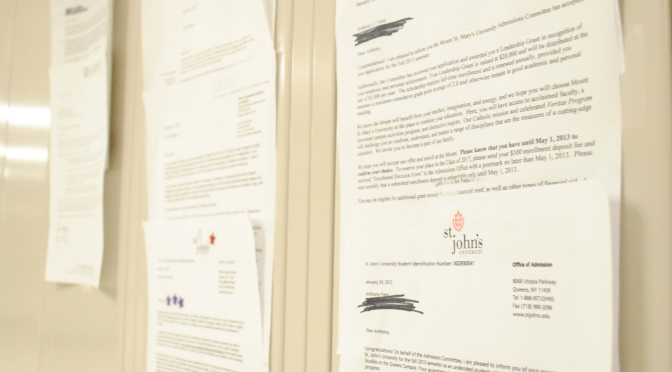 Early Action, Early Decision, Regular Decision. These are terms that seniors learn when they begin applying to colleges, sometimes as early as November 1st for the first early action deadline.

And while some have not heard back from their schools yet, seniors have begun decorating their lockers with admission letters. Walk down the hallway and in addition to the birthday wishes or prom invites, you’ll see papers posted as proof of their acceptances into colleges.

“I got my letter in December,” Alexis Alvarez ‘13 said, “It was like an early Christmas gift.”

According to Senior Guidance Counselor Ms. Clare Treichel, this tradition ‘just sort of happened.’ Two years ago one student was so excited about getting into college that he posted his acceptance letter on his locker. After that it just caught on. “I think it’s cute,” Ms. Treichel said. “It’s a good way to show accomplishment.”

Administrative Assistant Ms. Susanne Mendiola pointed out how it serves as a motivator for underclassmen as well. They walk down the senior hallway and see something to strive for. Especially this year, as this practice has heavily caught on.

In total there are four types of letters students can receive from colleges. The different letters can have four different effects on a student. These letters can defer them, wait list them, reject them or accept them. Deferrals are becoming more common and more stressful as they lengthen the waiting time. When asked why this was so, Ms. Treichel explained that applying early action to schools used to be unique. What she believes is happening is that other schools are beginning to catch on to the advantage of applying ‘Early Action’ as opposed to regular decision. Because of this, colleges cannot fill up all of their seats without waiting to see regular decision applicants, which results in numerous deferrals. Although being deferred is not the best feeling in the world, being waitlisted makes the college process harder because the actual acceptance or rejection cannot happen until after everyone puts in their final deposits to their first choice school. Rejection, although painful, proves to be a more merciful pain.

Seniors were encouraged to apply early so that they would have an advantage, but the application process is not over yet. There are still decisions to be made, scholarships to apply for and futures to be planned. These letters serve only as keys for whichever vehicles seniors will ride to start a life.The idea of life outside of high school often comes with distracting influences. Hobbies, jobs, Beach Week, prom, and graduation all contribute to an ugly effect dubbed ‘senioritis’. That’s right, ‘senioritis’; the contagious mindset that seems to attack some point after January. When the idea of change comes up, seniors often slack off, saying they are too preoccupied with the future. However, the “I Am” themed Senior Retreat on February 8th aimed to refocus seniors on the present rather than the past or future.

While it is important to work toward college, seniors sometimes forget the obvious: they are still in high school, and there are still grades, projects and thesis papers due. “It’s stressful trying to meet requirements and graduate with honors,” Darian Brown ‘13 said, “Senioritis happens.”

This, however, does not seem to stop acceptance celebrations. When asked about the effects of senioritis, Lucas Gepert ‘13 replied, “I feel it big time, but I feel like since I’m going to trade school for two years, I feel like it doesn’t affect me as much.”

The tradition of seniors decorating their lockers with acceptance and scholarship letters is continued with the class of 2013. Some posted their first ones back in December, while some are still awaiting the news. Not only is this a good way to share great news with peers, but it also opens the door for a well deserved congratulations.

One thought on “Decorating with Acceptance”