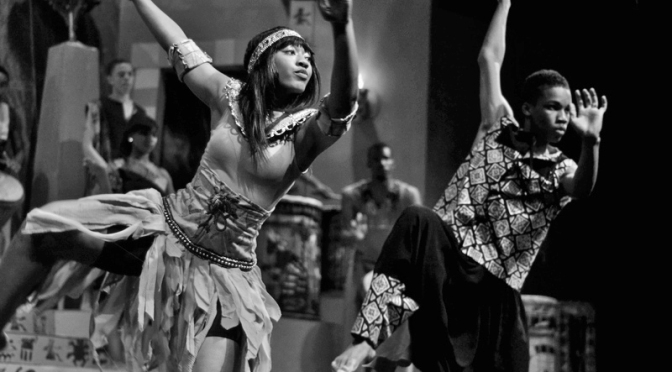 In its ninth year, annual production draws more attention than ever

“Sankofa” is a traditional African symbol representing a bird, or the saying, “It is not wrong to go back for that which you have forgotten.”

As the Bishop McNamara African Dance program closes out its ninth annual Sankofa production, less and less is being forgotten.

Within 48 hours, and three weeks before opening night of “Kleopata,” this year’s production, tickets were sold out for all five performances over the weekend of March 8-March 11. This made it nearly impossible for many students to get tickets to support their friends and classmates.

“I’m really happy we’ve reached the point where the community embraces it,” said Mr. Victor Bah, African Dance teacher and Director of the annual Sankofa production. Coming to America eleven years ago, Mr. Bah did not expect anything close to the popularity the African Dance program has received over the years. When Sankofa began, it was a move to break away from the Dance department and their annual Spring production. While the Dance program incorporated some aspects of African Dance into their routines, it was becoming increasingly difficult to maintain these traditions in the themes selected for the dance shows, Mr. Bah said. So, in 2003, the first Sankofa production, “Africa,” was performed by 18 students under the direction of Mr. Bah.

Mr. Bah said. So, in 2003, the first Sankofa production, “Africa,” was performed by 18 students under the direction of Mr. Bah.

This year’s program included 110 students, some who were part of the Sankofa Company, an elective course for main characters; and many more who are members of the African Dance levels one through four classes. The purpose of Sankofa is to highlight the dances that are rehearsed in the classes.

The story of Kleopata tells of the rise and fall of the last pharaoh of Egypt, Queen Cleopatra. Through deception and murder, Cleopatra rose to the throne, where she began loving relationships with Julius Caesar and later Marc Antony, who both succumbed to violent deaths, thus causing the downfall of Cleopatra and the Egyptian empire.

This year, the role of Cleopatra was split between seniors Ava McCoy and Rodneisha Gould, who took turns playing the lead and dancing in the ensemble.

“It’s really rare that you get to see raw African dance,” said Antonia Hill ‘12, who saw Sankofa for the first time this year. McNamara is not the only Holy Cross school to offer African Dance, but also the only school in the Archdiocese of Washington. Mr. Bah even claimed that throughout the entire country, there is not a single school he has heard of that has an African Dance program as robust as McNamara’s. “We don’t just dance; we tell stories with it,” Mr. Bah said.

The incredible success of Sankofa is due largely in part to the passion of the students involved, but it never would have succeeded without Mr. Bah’s vision. While Mr. Bah acknowledges that he could pursue further success in the show business, he does not forget his roots.

McNamara is the reason Mr. Bah came to America and he sticks around because he sees each year as a challenge to surpass the previous year. “All people should know their history, their culture, where they are coming from,” said Mr. Bah, and the goal is to take the past and use its lessons to progress in the future. Each year, Sankofa comes closer to fulfilling its full meaning, growing from a grassroots program to a cornerstone of McNamara’s identity; taking flight into the future but always remembering the past.