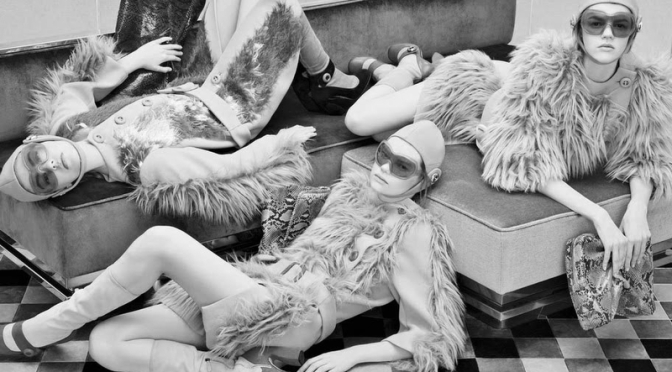 From this year’s fall to next years’ spring and summer, the 20s will roar. From fashion to

the stage, what’s obsessing right now is the prohibition age where everything was sober, green($$$) and golden and clear that life was good, unlike America today.

This December, Australian film director Baz Luhrmann (“Moulin Rouge” and “Australia”) will premiere his much-awaited new film about a lovesick social climber called “The Great Gatsby”, which is based on F. Scott Fitzgerald’s most famous novel of the same name published in 1925. It stars Leonardo DiCaprio as Jay Gatsby and Carey Mulligan as Daisy Buchanan. An exciting new chemistry one couldn’t wait for.

Speaking of “The Great Gatsby”, back in September during New York Fashion Week, American designer Ralph Lauren, who designed the costumes for the 1974 Gatsby film, designed his whole spring 2012 collection around the 20’s WASPy elite, Hampton’s extravaganza with fluttering sequined and feathered dresses to the most glamorous day looks ever. Very Mia Farrow.

“Luhrmann’s costume designer wife, Catherine Martin, is in charge of the clothes for the new movie, but Mulligan and her female co-stars need look no further than Lauren when it comes to red-carpet sparklers for the premiere circuit,” said Nicole Phelps of Style.com

Not only are the 20s’ inspirations making it’s way back into American Culture, the “golden twenties” of Europe shines again. For this season, Milan’s Prada was a sea of a pale, pinkish, sequined, checkered, snaked-skin, fur fantasy, a perfect wardrobe for a wild-card aviator heiress flying a jet across the Atlantic or the most fabulous paillette evening dresses for the war wearied House of Windsor after WWI.

For the French cinema, a groundbreaking ovation is the new French film “The Artist”, a black and white silent film getting a lot of attention here in the U.S. This not only portrays the rise and fall of a 20s silent film star, butt it is literally bringing back the glamour of silent silver screens which means no dialogue, only music. Will silent movies make a comeback?

Even our very own McNamara flapped for a 20’s musical comedy for the first play of the school year. “Anything Goes,” set sail during the fall season and met rave reviews from the audiences.

The question is, why the 20s for 2011? While there is no real, specific answer, it seems that with so many dilemmas of our time that are unremitting, like the economic downturn, people just want to escape to a world when life seemed Jazzy, glamorous, shiny, and rich.