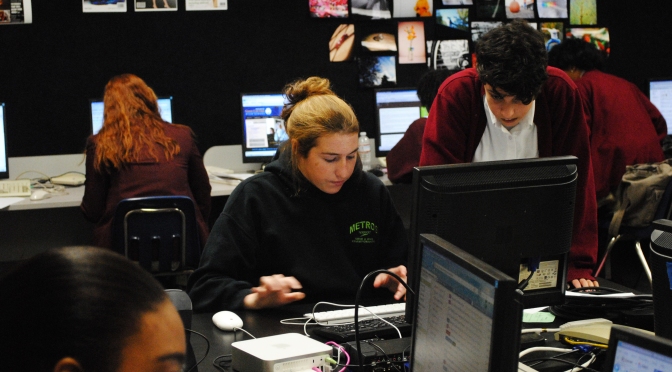 The Stampede has won the 2011 Marylander Award, given by the Maryland/District of Columbia Scholastic Press Association, in recognition of its work last year.  This award is given to the best overall high school newspaper in each of its divisions.

“The award makes me “proud of the work that the entire staff put into the newspaper,” said one of last year’s editors-in-chief, Alexandra Vinci ’11.

Alexis Jenkins ’11, another editor-in-chief and features editor, said, “I’m really excited that The Stampede won the award. The staff worked really hard last year and experimented with a lot of projects so I’m glad that it paid off.”

The Stampede received its highest marks in design, photography/art, and opinion and feature writing.  One judge wrote that The Stampede is “a solid paper with strong writing and a sleek design.”

The staff last year was composed of 28 students, advised by English teacher Charles Shryock IV. Journalism students of all levels meet during the same class period, which is taught by Mr. Shryock and lead in part by the editors-in-chief.  Contributions to the newspaper and website were also made by some students in the after-school Media Club.

Many alumni of The Stampede now write for or edit publications in college, including Iona College, Elon College, Chatham University, Towson University and The University of Maryland, College Park.

“Working on the newspaper taught me how to write journalistically, how to conduct interviews, and how to write stories under time constraints,” Jenkins said. “The Stampede also provided me with an insight into the ethics a journalist is held to and the responsibilities journalists have to their readers.”
Work by this year’s staff can be viewed on its website, read in the print edition at school, or read online through its digital bookshelf.