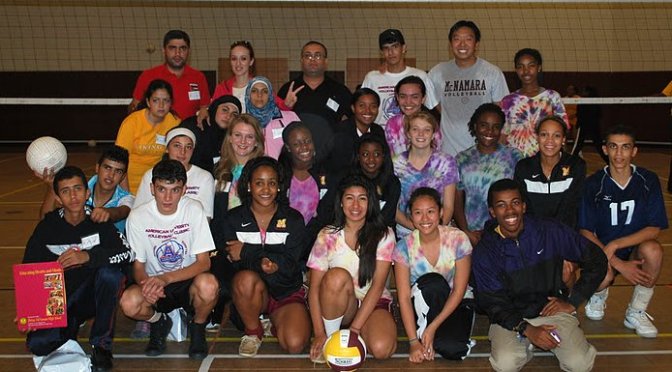 Bishop McNamara Hosts Student Athletes from Palestine
Megan Ardovini ’13
News EditorOn Friday September 23rd, Bishop McNamara hosted ten Palestinian volleyball players as part of the Sports Diplomacy Program. This program is run by the U.S. Department of State with the intention of introducing a parallel between athletic success and both personal and academic growth.
One of the purposes of the program is to present the travelers with a typical American high school day. Bishop McNamara was the high school chosen for this particular exchange by the Bureau of Educational and Cultural Affairs within the United States Department of State.
The players who get to make this trip were specifically selected by the Consulate of Palestine based primarily on their performance on club level teams. The Consulate chooses four players from three different clubs to make up a group of six girls and six boys. One of these twelve, Wisam Saddo, tells us that while twelve were selected only ten made the trip due to complications regarding visas.
“The visit gave us the opportunity to widen our perception,” says Coach Randa Shélleh. The trip was an eye opening look into cultures, academics, and the lifestyle of counterparts of the same age halfway around the world for students on both sides of the exchange. Bishop McNamara served as a host for these students who were seeking a look into life in an American high school. The team’s interpreter, Ahmed Elsayel, observes the day, “As if it was a full day American immersion (sp).”
Just as any of our visitors, their day kicked off with the introduction of our Administration. The ten students and two coaches then received a student led tour of our school. Throughout the day, they were able to experience five classes in session. Among these were Spanish III with Mr. McClain, Honors French I with Ms. Kemmou, and Honors Global Studies with Mr. Pozniak. After experiencing all the chaos of an American lunch period with our students, the day continued with two more classes. African Dance with Mr. Bah and Advanced Placement Psychology with Ms. Treichel rounded out the classroom experience. After an eventful day, it finally came time for the team to show why they were selected in their country to be the ten to make the trip.
As you ventured towards the fine arts building there was an apparent, resonating “boom” originating from the gym. It wasn’t our volleyball team preparing for their games against St. Mary’s Ryken that afternoon. Rather, there was a Palestinian team laying down spike after spike proving just how much skill they had.
On behalf of the ten students, coaches, and the entire group, Coach Randa Shélleh said she would like to “Express gratitude for giving us a chance to visit the school.”